The Pasifika Education Plan Monitoring Report provides an update on how our Pasifika learners are achieving against this goal.

This monitoring report provides a national and regional picture of how Pasifika learners are progressing as the PEP is implemented. It gives us an idea of what level of progress is needed to achieve the PEP's goals and targets by 2017. Actions to improve outcomes in these identified areas are included in the PEP. The success of these actions will be analysed in this and subsequent monitoring reports to assess what we are doing to create an environment for Pasifika educational success.

The compass for Pasifika success is a fundamental part of the PEP. It is a visual representation that helps to ensure Pasifika learners and their parents, families and communities are at the heart of efforts to increase Pasifika participation, engagement and achievement in learning. It is vital that all parts of the education system work together to achieve the goals and targets of the PEP.

Pasifika people have multiple world views and diverse cultural identities. They are able to operate and negotiate successfully through spiritual, social, political, cultural and economic worlds. Success in education requires harnessing Pasifika diversity within an enabling education system that works for young people, their families and communities. This requires the education system, leadership and curricula to start with the Pasifika learner and their family at the centre, drawing on the strength of their cultures, identities and languages. The more we understand the learner, the better we can respond to their needs, aspirations and achievement goals.

Pasifika people make up approximately 7.4% of the total population, with 295,941 people living in New Zealand in 2013. The growth of the Pasifika population continues to be a significant attribute to society in New Zealand. Pasifika was the fourth largest ethnic group in 2013, with 35.7% of their population under the age of 15 years. The success of the PEP is vital in contributing to the education of this fast growing group of young New Zealanders.

Whilst the Pasifika population is growing, the proportion of Pasifika people living in New Zealand and born in the Pacific Islands is reducing (from 35% in 2006 to 30% in 2013), this trend is expected to continue.

Two-thirds of the Pasifika people live in the Auckland region (with just over half of those living in South Auckland).  The next biggest region outside of Auckland is Wellington, which has a Pasifika population of 36,000.

There appears to be a trend for population flows outside of Auckland. Regions such as Marlborough, Tasman and the Manawatu are all experiencing small increases in Pasifika population.

The difference in population profile, along with a higher fertility rate for the Pasifika population, will result in an increase in the number and proportion of Pasifika children and young people participating in ECE, schooling and tertiary sectors.  It is estimated that Pasifika students will rise from 10% to 20% of the total school population by 2050. 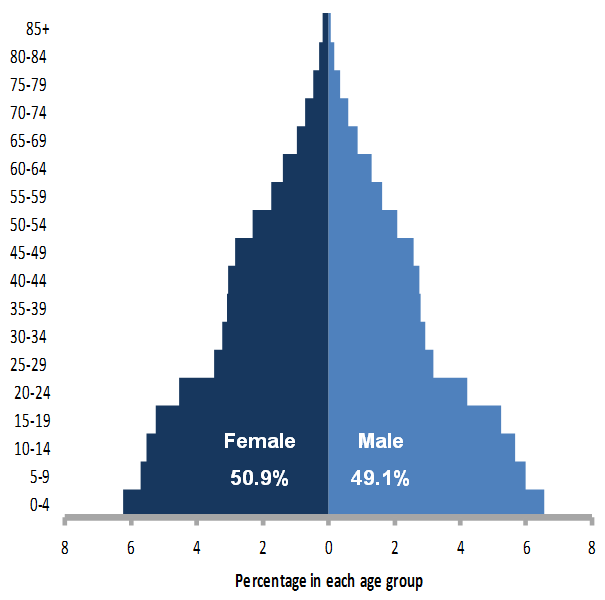 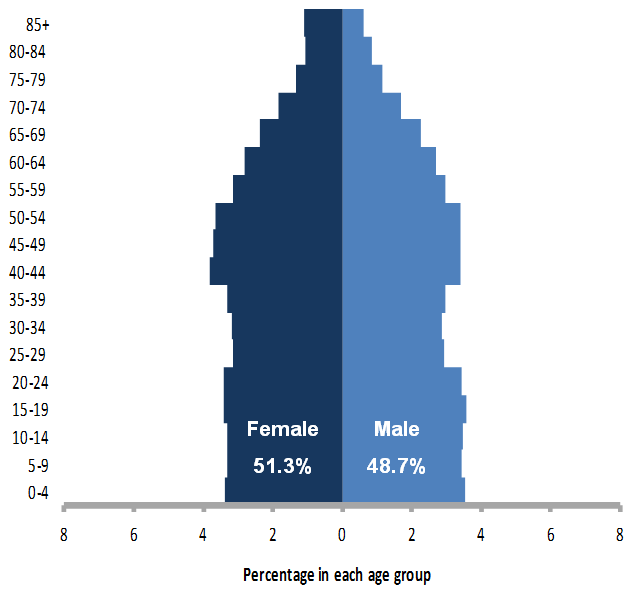 The structure of Pasifika peoples' age profile is such that it is profoundly disproportionate, with many younger people and very few elderly. In 2013, the median age of Pasifika was 22 years, compared to 38 years for the total population. With such a high proportion of the population in their youth, this only emphasises the importance of education to this fast growing population.

In 2013, Pasifika learners showed improvement in many areas of education compared with nationwide general trends. Figure 1.1 shows a broad picture of where we are now in terms of the indicators, recent improvements and what improvement is required to reach the specific targets for the future.

Each spoke represents an indicator from this Report. The target for each measure has been adjusted to equal 1.00 (the black outer line). Each of the coloured lines represent the position of the indicator against the 2017 target for an individual year. The dark blue line represents the position of the indicator based on the 2013 data. A value of less than 1.00 means that the target has yet to be reached, while a value equal to or greater than 1.00 means the target has been achieved.

Improvements have been made across all focus areas of the PEP, though action still needs to be taken to reach the targets set. 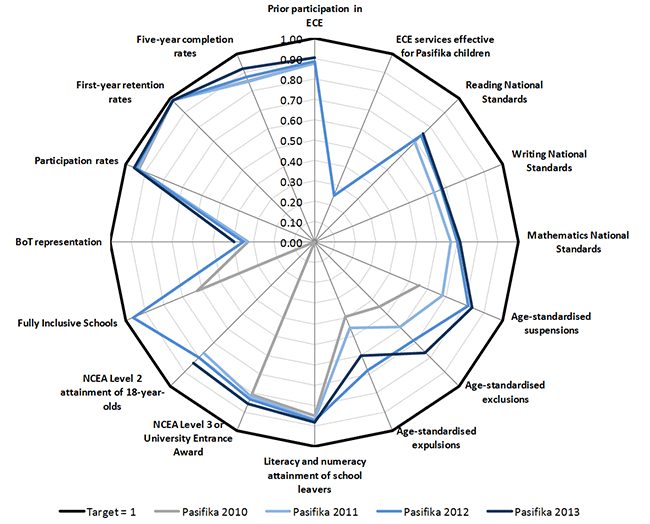 The following section provides a summary of the latest year's performance against the PEP. Data predominantly relates to 2013, however, more current 2014 data is used where available. Comparisons with non-Pasifika have been provided where relevant to the target set out in the PEP.

Education Data Requests
If you have any questions about education data please contact us:
Email:   Requests EDK
Phone: +64 4 463 8065