"There are very few things that I would say that as a principal that really excited me around pedagogy. I feel quite proud about because it’s (Developing Mathematical Inquiry Communities) made a significant difference to teachers and to children." Principal

"...he gets up wanting to come to school every day. He is actually wanting to learn maths." Parent

"The paper that is offered with Bobbie and Jodie was delving …into teacher allocation of the status of students and how children pick up on that. Because they've been streamed from the word go, the children then have this disbelief in their own abilities…that was quite evident in some of the children I had in my class. So, it was a barrier. As a teacher how do I lift that status? Make what they say valued and important? …Just making them have this absolute belief in themselves and their maths." Teacher

"People are stepping up in classrooms… the sense of pride and mana that they have for themselves when they know, 'Oh, I get it'." In-class mentor

"We did this together." Board Chair

"As one of our proverbs says, O oe o le puna ma le fai mea – You are the rising water. You started this project, Dr Hunter. Thank you. Well done. You and the team deserve to be acknowledged for your fantastic work. Fa'afetai lava." Parent

For the set of reports on the profile and change data for Russell School Evidence of improvement: Towards equity, excellence, belonging and wellbeing 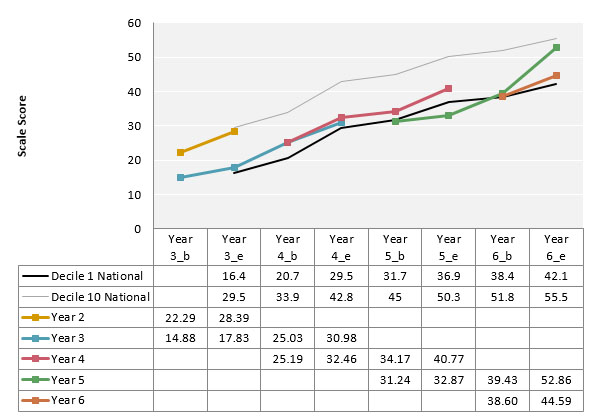 Figure 1 shows that while there was variability in the degree of improvement, all cohorts at Russell school improved their scores over time, and by the end of 2016 (the second year of DMIC implementation) all of the cohorts at this school were above the national average scores for Decile 1 schools (the solid black line).

The 2015 Year 5 cohort (green line) has also finished with an average scale score notably higher than the national average (52.86 patm compared with 42.1 patm respectively), marking a dramatic improvement within one school year. This gave the cohort an average scale score closer to the Decile 8 national average than the Decile 1 average, as they reached the transition to intermediate.

Within the first two years of the DMIC implementation period, several cohorts scored higher than the cohort ahead of them, sometimes markedly so. 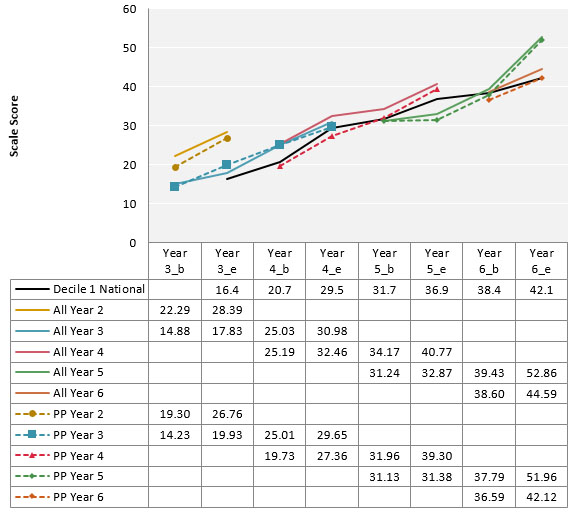 Pasifika learners, did, on average, score lower than their cohort average at the outset of the DMIC intervention early in 2015. There is variation in how wide these gaps started but they all tightened over the 2-year period. By the end of 2016, these gaps were negligible across all cohorts. For more detail see the source NZCER Report.

The early change data on student bullying rates across the three Porirua East Schools for the first year of DMIC implementation in 2015 showed marked improvement.

There was change also for students' sense of belonging at school.  Baseline data for the three Porirua East schools indicated that there were children who, in mathematics, 'never' or 'hardly ever' felt good to be Māori, or Samoan, or their own (other) culture. This started changing. For example, in the Year 1 post-testing, Māori, Samoan, Cambodian and Iraqi students in Porirua East explained:

"I feel proud in my maths lesson today by carrying my family with me."

"I felt bad 'cause people tease my culture... (in maths now) I feel normal."

"To be Samoan today in maths was awesome."

The percentage of students who never or hardly ever felt good to be their culture dropped from 8.6% to 3.3% over the seven-month early implementation period.

See the video on perspectives from the school community on Russell School: The Difference

For an overview of the evidence, see:

Alton-Lee, A. (2017). 'Walking the talk' matters in the use of evidence for transformative education. Invited paper for the International Bureau of Education - UNESCO Project: Rethinking and repositioning curriculum in the 21st century: A global paradigm shift. Wellington, New Zealand: Evidence, Data and Knowledge, Ministry of Education.

For more on the underpinning evidence for claims made about leadership and professional learning see: