Why this is a focus area

The largest numbers of Māori students in formal education are in primary and secondary school.  Māori students in English medium schools are more likely to have lower levels of achievement in literacy, numeracy and science than non-Māori students.  If not addressed early, students are likely to fall behind and will be at risk of disengaging in the early years of their education.

Ninety percent (183,079 students) of Māori in primary and secondary education are in English-medium schools, thus lifting the performance of the education system for these students is vital to realising the Ka Hikitia vision of Māori achieving and enjoying academic success as Māori.

The literacy and numeracy skills gained at primary school during Years 1-8 are essential skills upon which all other learning is based. Students who achieve the National Standards for these essential skills have the ability to gain the necessary prerequisites to move on with more challenging areas of education.

The success of an education system is manifested in, among other things, the success of individuals in finding sustainable employment. A formal senior school qualification is a measure of the extent to which young adults have completed a basic prerequisite for higher education and training or for many entry-level jobs.

Despite recent improvements, many Māori students are leaving education early and without the skills and qualifications they need to reach their potential.

Where we want to go: Ka Hikitia Goals and Actions

The National Standards are descriptions of what students should know and be able to do in reading, writing and mathematics in years one to eight of their education. They set clear, consistent expectations for learning and are designed to support students in developing key competencies and strong foundations for achievement in all learning areas. They are designed so that students who achieve the standards will be on track to achieve at least NCEA Level 2 in Year 12 at secondary school.

Figure 3.1: Proportion of learners in years 1-8 achieving at or above the National Standards, by subject and ethnicity (2013-2016) 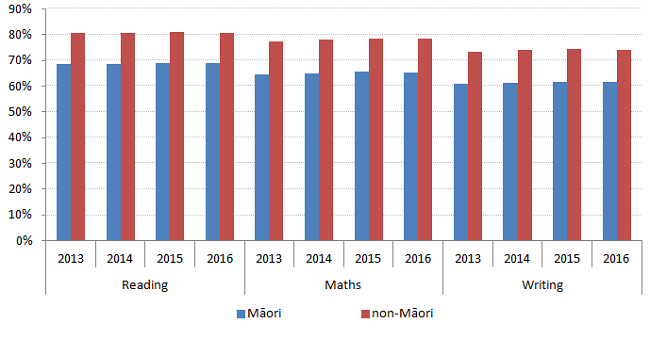 A student's engagement, their 'opportunity to learn', is an essential part of helping students to reach their educational potential and obtain the prerequisites for higher education and training or for many entry-level jobs. Poor attendance, stand-downs and suspensions are indicators that this pre-requisite engagement is not occurring. A decreasing rate of these indicators for Māori will be an indication of progress toward the Ka Hikitia vision for Māori educational success.

Regular attendance (90-100% of the time) rises slightly in primary school and then falls for the remaining year levels. By year 13 only 28.1% of Māori, and 50.1% of non-Māori are attending regularly.

Measures of engagement show a trend of decreasing stand-downs and suspensions for Māori.  Faster improvement is needed to reach equity and ensure that Māori have the same 'opportunity to learn' as non-Māori.

A good level of literacy and numeracy obtained from schooling is vital for establishing foundations needed for lifelong learning.

The target for 2017 is to have 95% of all Māori school leavers achieving NCEA Level one literacy and numeracy requirements. Even with the positive increases to date, action still needs to be taken to achieve this. 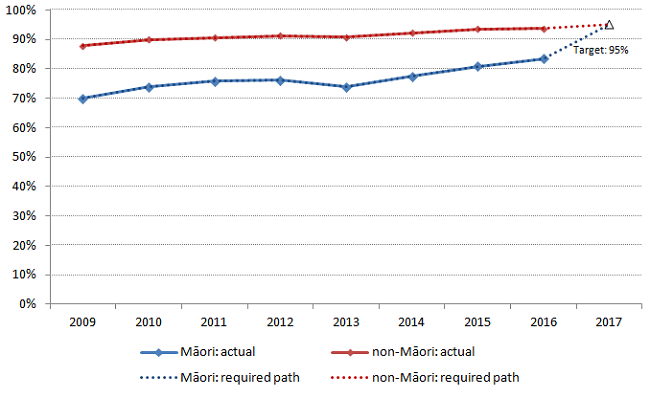 This indicator is a measure of those students who successfully achieve a full senior secondary school education. Success is measured by the attainment of NCEA Level 3 (the qualification typical of Year 13) or above (this includes university entrance, which is not a qualification per se but still a useful measure of success and future opportunity.).

Although there has been a significant increase in the proportion of Māori school leavers achieving NCEA Level 3 or above, the gap between Māori and non-Māori achievement has narrowed by only 2.5 percentage points since 2009. It is unlikely that the goal of parity will be achieved in 2017. 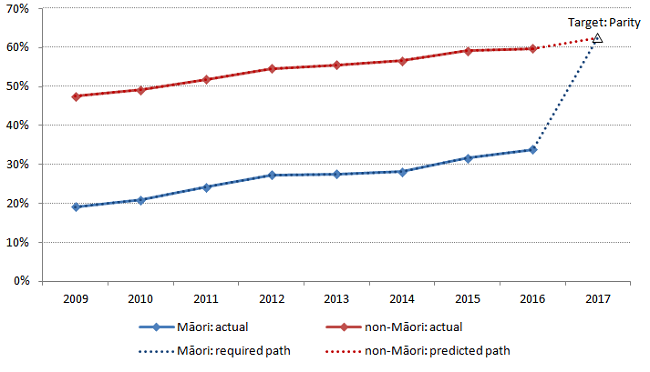 18-year-olds with NCEA Level 2 or above

An NCEA Level 2 qualification gives people opportunities in terms of further education and employment, contributes to better health outcomes and to a better quality of life.

Since 2011, there has been a 17.2 percentage point increase in the proportion of Māori 18-year-olds achieving NCEA Level 2 or above, to 74.3% in 2016. As a result of this increase, the gap in achievement between Māori and non-Māori has narrowed 8.5 percentage points since 2011.

Despite the positive increases to date, action still needs to be taken if the target of 85% of Māori 18-year-olds achieving NCEA Level 2 or equivalent in 2017 is to be met. 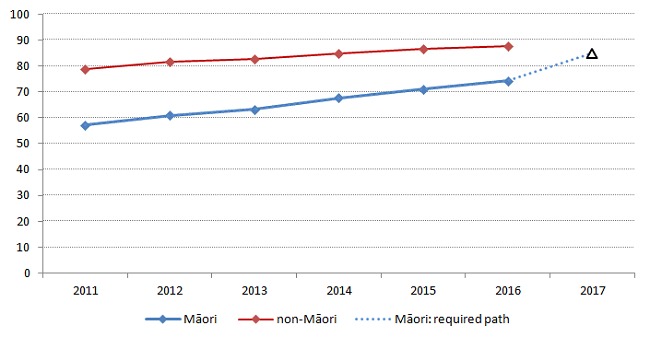 Māori representation of Schools' Board of Trustees

To be successful in realising the Ka Hikitia vision of all Māori achieving academic success, all stakeholders with a role to play in Māori education success must have high expectations for Māori students and collaborate to realise them.

School boards of trustees are responsible for the governance of the school or kura. Promoting the value of board membership to Māori parents, whānau, hapū, iwi and communities is identified as an important way to ensure governance decisions support strong outcomes for Māori students. The extent to which a school's Board of Trustees is representative of the proportion of Māori students attending the school is indicative of how successful this promotion has been.

Figure 3.8: Proportion of schools with fair Māori representation on their Board of Trustees (2000-2014)

Information Queries
For all queries related to the reporting publication and use of data please email:
Information Mailbox