Why this is a focus area

Increasing participation by Māori to the national participation rate, and to the Better Public Services (BPS) goal of 98% in 2016, will increase the number of Māori who receive this foundation for success in later education.

Where we want to go: Ka Hikitia Goals and Actions

Prior Participation in ECE

The target was that 98% of all Māori new school entrants in 2016 have prior participation in early learning. Despite the positive increases we have seen, this target was not met.

Figure 2.1: Percentage of new entrants with prior participation in early childhood education (2010-2016) 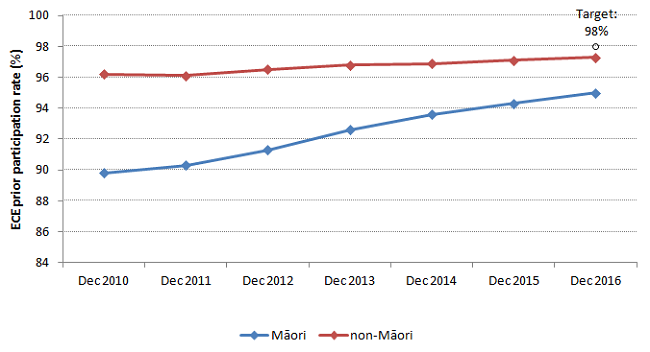 In 2012, ERO published a report evaluating how early childhood services work in partnership with the whānau of Māori children. The report was based on data gathered from a nationally representative sample of 374 early learning services. It found that, while 78% of the services built positive relationships with whānau only 10% had built effective, culturally responsive partnerships.  An additional 45% were categorised as working to some extent in partnership with whānau Māori.

Ka Hikitia sets the target that, by 2017, 85% of early childhood education services reviewed by ERO will be working to some extent or to a high extent in partnership with Māori whānau. This would be an increase of thirty percentage points over five years from the 55% which met this criteria in 2012.

Partnership with Whānau Māori in Early Childhood Services defines effective partnership as having occurred when early learning educators and whānau have:

Figure 2.2 ERO findings on the extent to which ECE service providers' work in partnership with whānau Māori5

Since 2012, there has not been a follow-up national report on the extent to which ECE providers are working in partnership with whānau, and progress towards the 85% target cannot be assessed at this time.

Information Queries
For all queries related to the reporting publication and use of data please email:
Information Mailbox