This report looks at the impacts the Global Financial Crisis had on the earnings of tertiary education graduates in New Zealand, and explores the extent to which these impacts may still be being felt by those impacted.

The Global Financial Crisis (GFC), which began in late 2007, is one of the most significant economic downturns of recent times. In this report, we look at the impacts the GFC had on the earnings of tertiary education graduates in New Zealand. We compare the earnings of young graduates entering work over the period 2005 to 2017, and explore the impacts of the GFC on their earnings and the extent to which these impacts may still be being felt by those impacted.

Earnings are adjusted for inflation, and analysed for different levels of tertiary education qualification, but they not been adjusted for any other differences there may be between pre-GFC cohorts and those of later years.

The results suggest that the GFC had a sustained impact on earnings that was felt in two different ways:

Earnings are affected by changes in economic business cycles. In general, down times hit the least experienced and least educated first, and often the hardest. Having a higher qualification often acts to protect some of these effects (e.g.  Smart (2015) Chapter 5).

But to what extent do business cycle impacts persist once the economy has recovered? Do people leaving school or tertiary study into a poor labour market ever recover to the level of those who entered in average or good times?

As a case study, we look at the impacts in New Zealand of the Global Financial Crisis (GFC) which began in late 2007 and whose effects persisted until 2013. We are able to contrast that period against a relatively strong labour market period in the last few years.

New Zealand’s economy was seriously impacted as a result of the GFC, with unemployment jumping from 3.6% at the end of 2007 to 6.1% by the end of 2010, with rates remaining close to 6% through to 2013. The effects for younger adults were worse. Unemployment rates for 20 to 24 year olds rose from 6.4% at the end of 2007 to over 11% by 2009, and sat above 10% through to 2014. The effects on earnings were widely felt, with a flattening and falling in average earnings seen across all education levels between 2009 and 2011. Earnings reduced not just through lower rates of employment, but also for those who were retained in employment. Even those with higher levels of education were not immune, with average earnings falling by 2% to 3% for those with degrees (Ministry of Education, 2020a, 2020b).

Previous research, (Smart (2015), has examined the impacts of the GFC for tertiary education graduates in New Zealand. Looking at the earnings of young graduates one year after finishing study, Smart noted “…The data shows the usual pattern of higher earnings for those with higher qualifications. It also shows the impact of the Global Financial Crisis on earnings, with all qualification levels above Level 1-3 certificates exhibiting a decrease in real earnings. However, the premium over Level 1-3 certificates was still considerable for most levels of higher qualifications.”

We replicate this analysis in Figure 1 below, extending it with six more years of later data. The graph shows inflation-adjusted earnings for young domestic tertiary education graduates leaving study and entering the workforce the following year. We look at young graduates only, i.e. those where their earnings are more likely to reflect their tertiary education than any significant prior work experience. We compare these for “pre-GFC”, “GFC” and “post-GFC” periods. In reality, it’s difficult to assign these periods precisely, and these transition points are likely to overlap to some extent, or even differ depending on the impact being looked at. For the purposes of this analysis, we mark the GFC period in New Zealand from 2009, when unemployment began significantly increasing, until 2012, after which unemployment started falling. 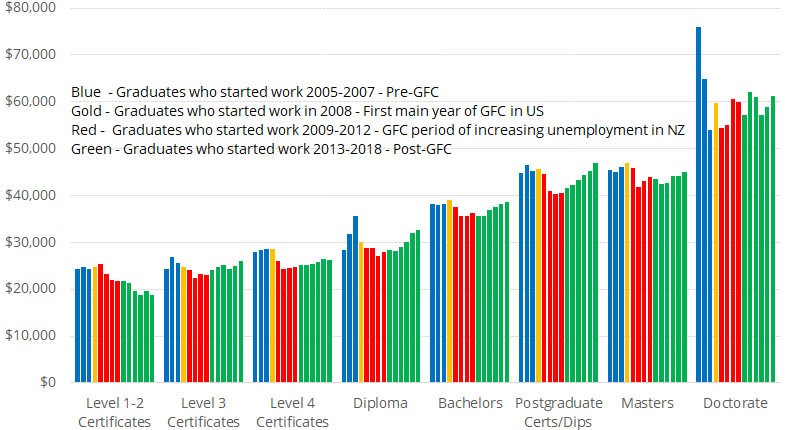 The graph follows closely that in Smart (2015) for the years before and during the GFC. There is a drop in first-year earnings that started to be seen in 2009, and was more fully seen in 2010. This suggests a delayed impact. The GFC did not have an effect on first-year earnings for those starting in 2008, however their second-year earnings (i.e. those for 2009) were (see below).

For those completing Level 1-2 certificates, first-year earnings for post-GFC cohorts have been declining rather than increasing, and remain significantly lower than they were pre-GFC. Over this time period, public funding for Level 1-2 qualifications has been refocussed towards foundation education, with broader trades education moved up to level 3.  The size of this group has reduced significantly since 2005, and the characteristics of Level 1-2 graduates in 2018 is likely to be quite different to what they were in 2005.

What effect did the GFC have on earnings growth and trajectories? Were these effects permanent, or did those whose earnings were affected recover this loss and eventually follow similar earnings paths as post-GFC cohorts. Figures 2 and 3 look at these questions for two different types of graduates; those who completed a bachelors degree, and those who completed a Level 4 Certificate. 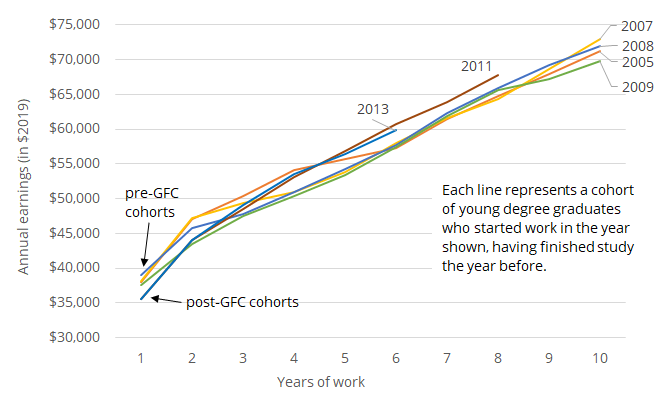 Cohorts who entered the labour market pre-GFC, between 2005 and 2007, and were in their second, third or fourth year of work during the GFC years did not have a decline in annual earnings. Their earnings increased every year during the GFC.

However, the dip in their earnings curves seen in Figures 2 and 3 suggests that their earnings growth did slow during the GFC. This dip was not seen for post-GFC cohorts. The size of the dip suggests the GFC acted to reduce growth in earnings by around 3%-6% for degree graduates, and 5%-8% for Level Certificate 4 graduates.

Figures 1-3 highlight another impact of the GFC, one that affected starting salaries for those cohorts who entered work after the GFC. For those graduating with bachelors degrees, for example, first-year earnings for immediate post-GFC cohorts were at least 5% lower than they were for pre-GFC cohorts. For Level 4 Certificate graduates, they were at least 10% lower. This was a sustained impact, but it has diminished over time. By 2017, first-year earnings had increased back to pre-GFC levels for most levels of qualification, except Level 1-2 Certificates and Level 4 Certificates.

Data relates just to young domestic graduates whose main activity in a year was employment. Those with significant periods in study, or who were overseas, or not in employment or study are not included. Impacts in terms of what these graduates might have earned in the absence of the GFC are not measured.

All results in this report that are produced using the Integrated Data Infrastructure (IDI) managed by Statistics New Zealand data are not official statistics. They have been created for research purposes.

The opinions, findings, recommendations, and conclusions expressed in this report based on these data are those of the author(s), not Statistics NZ, or any other agency whose data has been used.

Access to the anonymised data used in this study was provided by Statistics NZ under the security and confidentiality provisions of the Statistics Act 1975. Only people authorised by the Statistics Act 1975 are allowed to see data about a particular person, household, business, or organisation, and the results in this report have been confidentialised to protect these groups from identification and to keep their data safe.

Careful consideration has been given to privacy, security, and confidentiality issues associated with using administrative and survey data in the IDI. Further detail can be found in the Privacy assessment for the Integrated Data Infrastructure available from www.stats.govt.nz.